What to Expect From Fall Weather in Myrtle Beach 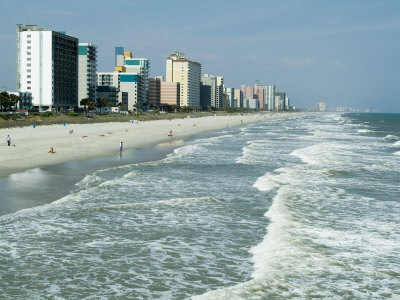 Fall is a great time to visit Myrtle Beach. Some people come year after year in the fall because they love being able to enjoy all their favorite attractions without the summer crowds. Broadway at the Beach is still open for business and of course the beach is still here, as well.

While things can vary from year to year, and even from week to week, here’s what to expect when you come to Myrtle Beach in the fall:

Average high temperatures in Myrtle Beach start out at 86 degrees Fahrenheit, and by the end of the month, they only drop to 80 degrees. Most people love the weather in Myrtle Beach in September! The average lows are pretty warm, as well, often only cooling down to about 59 degrees.

Another great reason to visit in September: Precipitation is much lower than it is in the popular month of August, when rain peaks. You may still run across a stray storm, but they get less common as the year goes on.

It’s usually still plenty warm in Myrtle Beach in October. Average highs start out around 80 degrees Fahrenheit, and by the end of the month they cool to a still-comfortable 72. Average lows will begin to drop by the end of the month though, so Halloween night in Myrtle Beach is generally sweater or coat weather. Overnight lows in early October are nearly 60 degrees, but by late October they drop to 48.

By the time November arrives in Myrtle Beach, it tends to feel like early fall feels in other parts of the country! In the beginning of the month, average highs are still 72 degrees, but by Thanksgiving, you’re likely to see highs around the mid-60s. And overnight lows can get quite chilly—around 40-45 degrees.

The upside is that late fall tends to have the lowest precipitation of the year—on average, Myrtle Beach only sees about three inches of rainfall in November.

When it comes down to it, visiting Myrtle in the fall can be a wonderful idea. You may need to pack a sweater or two, but there’s still plenty of fun to be had!