Simpsons Fans: Experience a Slice of Springfield in Myrtle Beach 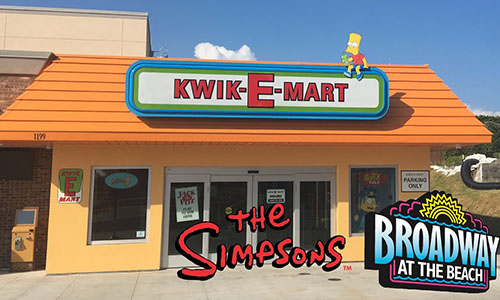 Cowabunga, Simpsons fans! There’s a pair of all-new reasons to get excited about visiting the Grand Strand — two recurring landmarks from America's favorite TV-cartoon town, Springfield of “The Simpsons” fame, are moving in on the Carolina coast.

As the latest attraction at Myrtle Beach shopping/dining/entertainment hot spot Broadway at the Beach, “The Simpsons in 4D” features a replica of the Kwik-E-Mart, where Homer regularly goes to get his junk-food fix, and a soon-to-open replica of the Aztec Theater, where Springfield’s movie-goers go to catch the latest releases on the silver screen. The new attraction allows visitors to cross the lines of animation and reality to experience a day in the life of Homer, Marge, Bart, Lisa, Maggie and the rest of Springfield’s beloved residents.

“We are thrilled to bring The Simpsons to Myrtle Beach in a way that this incredible brand deserves,” said Michael Needham, founder and CEO of SimEx-Iwerks Entertainment. “Launching this experience will be the culmination of years of passionate effort to bring The Simpsons to life beyond the screen. We are creating a series of memorable moments enriched with tremendous detail throughout the attraction so that guests feel they are a part of The Simpsons universe.”

Already open for business is the Kwik-E-Mart, which is located near the Dragon's Lair Fantasy Golf putt-putt course and the Broadway 16 Cinema movie theater. Serving as a convenience store with a distinct Simpsons twist, the Kwik-E-Mart offers some of the show’s most famous merchandise, including Buzz Cola, Duff Beer (alcohol-free — at this location, anyway), Heat Lamp Hot Dogs and Homer’s favorite food on the planet — Lard Lad Donuts.

Another popular item that brings Broadway at the Beach crowds through the Kwik-E-Mart doors is a massive selection of Squishees, the show’s sugary take on frozen beverages the likes of Slurpees and Icees. Choosing from a wide variety of tasty flavors and bright colors, customers can create their own Squishee blend for some Simpsons-style liquid refreshment. Additional Simpsons-themed souvenirs and other common convenience store items are also available.

Coming soon to a location right next door to the Kwik-E-Mart is the Aztec Theater, one of the focal points in the fictional town of Springfield. Moving into the remodeled IMAX Theater, which featured high-tech special effects, the Aztec Theater promises a unique experience that brings The Simpsons to the big screen and adds an extra dimension to the lovable main characters and other recognizable residents of Springfield.

In addition to a creatively cool lobby and a state-of-the-art theater experience, the Aztec Theater will also feature costumed characters from the Simpsons — including Homer, Marge, Bart, Lisa and Maggie, as well as other favorites from the show making cameo appearances. The movies will be never-before-seen films featuring the Simpsons with amazing special effects.

Bonus — guests at Long Bay Resort on the Myrtle Beach oceanfront will have the opportunity to step into a scene from The Simpsons with a free adult admission to the attraction through the Brittain Rewards program. Of course, guests can visit the Kwik-E-Mart with no admission fee (just be careful not to gobble down too many Lard Lad Donuts). There are plenty of free photo ops outside the two buildings, as well, since the exterior has a distinct Springfield look and feel.