Catch an Unforgettable Concert During a Grand Strand Getaway 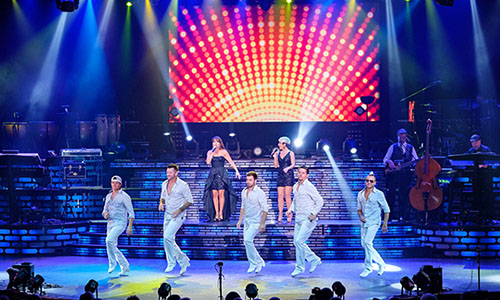 Research has found that familiar music is one of the most powerful ways to spark a person’s favorite memories from the past. For example, hearing a classic summer song that played regularly on a memorable beach trip might instantly usher in memories of toes in the sand and good times spent on the shoreline. Hearing the tune that served as the soundtrack to the first dance at your wedding might bring back visions of the big day, when your closest friends and dearest family members celebrated the start of your and your spouse’s new life together. And similarly, hearing a particular favorite album might summon fond thoughts of a good friend who attended one or two of the artist’s concerts with you.

So it stands to reason that, if you want to make an already awesome vacation even more memorable, seeing a concert during the getaway is one sure-fire way to do it. And on the Grand Strand, the opportunities to catch some stellar live music abound.

During your next getaway to the Myrtle Beach area, consider catching a favorite artist or other highly talented performer in concert at one of these Grand Strand music venues:

House of Blues: Found at North Myrtle Beach shopping/dining/entertainment hot spot Barefoot Landing, this nationally renowned, juke joint-inspired music venue hosts house-rocking concerts throughout the year, regularly bringing in national and regional touring acts, as well as an assortment of talented homegrown artists. Upcoming highlights on the 2019 music calendar here include Dropkick Murphys on March 8, Walker Hayes on March 15, Buckethead on March 22, the Marshall Tucker Band on March 29 and Scott McCreery on March 30. April sees Chase Rice, Lil Baby and Blue October take the stage, while Shinedown and Parkway Drive are set to rock the house in May.
Check out the HoB’s full concert lineup at houseofblues.com.

Carolina Opry: Located just off Highway 17 in Myrtle Beach next to the Pirates Voyage dinner & show venue, singer/producer/entrepreneur Calvin Gilmore’s Carolina Opry hosts a full schedule of popular performances throughout the year. Among them, the award-winning, namesake Carolina Opry variety show brings together 35 talented performers to present a crowd-pleasing mix of high-energy music, comedy and dance. Other regular shows include the Time Warp live musical performance that brings back the biggest hits of the ’60s, ’70s and ’80s; the Thunder & Light dance, laser and Magic show; and the Pure Magic show featuring amazing illusionists The Wagsters.
See the full Carolina Opry schedule at thecarolinaopry.com.

Alabama Theatre: Another Barefoot Landing attraction, this entertainment venue started by legendary country-music group Alabama presents a regular schedule of musical performances, many of them with a country lean. Popular draws include ONE the Show, which in 2019 is celebrating its 25th year of delighting audiences with its mix of country, gospel, Broadway, pop, rock and family-friendly comedy. The upcoming concert lineup here includes The Oak Ridge Boys on March 16, Three Dog Night on April 6, The Midtown Men on April 13, and Josh Turner on June 15.
Explore all of the upcoming Alabama Theatre events at alabama-theatre.com.

These are just three of the venues that regularly present live entertainment on the Grand Strand — other opportunities to catch a live show in the Myrtle Beach area abound. When you’re ready to soak up some coastal sun, fun and music Grand Strand-style, book your getaway at Long Bay Resort on the Myrtle Beach oceanfront. With our wide range of comfortable accommodations and luxurious on-site amenities, we’ve got everything you’ll need to get away from the grind and make some rockin’ memories during your Myrtle Beach area vacation.